When I was asked to give an example of a transmedia franchise, one jumped into my mind more quickly than any other: Teenage Mutant Ninja Turtles. It is difficult to imagine a world without these green rapscallions because they were so very present in my life, starting with the cartoon series which began airing the year I was born(1986). The story, which everyone knows who watches or has watched the turtles, is as follows. A bunch of turtles in the sewer stumble upon some radoiactive goo, which magically turns them into these: 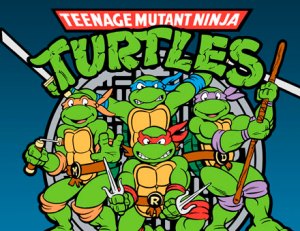 These guys fight ne’er-do-wells across the city(ostensibly New York) under the guidance of their sensei, Splinter, who also encountered the goo. Needless to say, if you were a little boy or girl, you went nuts about these guys. They ate pizza, said “dude” and “gnarly” practically all the time, and furthermore, you could buy them. Well, not them, per se, but these: 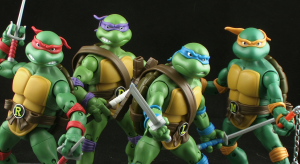 Yeah, I had all of ’em. Also, around 1990, they released a movie, the first in a trilogy of turtle-mania. If you watched the show, and you had the toys, you definitely went and saw the movie, which gave us this musical gem along with hours of live-action ninja frassle:

As their popularity faded in the late 90’s, many attempts at re-imagining the turtles followed. I believe Nickelodeon owns the rights to TMNT now, and, last I checked, this is what they were up to: 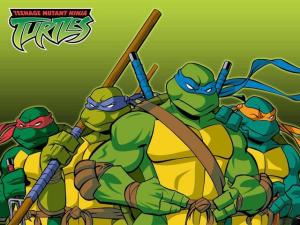 Everything got more extreme, and muscly, too. I hear there’s a new movie in the works, now, as well. Also, there’s a comic series. In short, there is no media which TMNT has not made a shell-print on, not even clothing: my TMNT undies are my favorite. I’m a good example of the “nostalgia crowd” which will always love me some turtles, and likely as not, if I have kids, they’ll be getting a heaping helping of these guys too…