For my third and final DS106 assignment, I chose to redo a past photo.

The assignment specifically asked for a person to hold a past picture of themselves, but I really wanted to recreate a picture of my parents from 1974 holding their dog, Gretch, and their cat, Leonardo. These pets are, of course, long since passed on, but we used my parents cat now, Loco, and my dog, June.  I showed them the picture and asked that they dress similarly to the clothes they were wearing in the picture. They also studied their facial expressions and body language prior to taking the new photo.

When I was done editing, I showed the two photos side by side to my parents and after studying it for a minute, my dad said, “In hindsight, we should have worked on the lighting and made June turn 90 degrees, but I think you made your point, Lindsey.” To which Mom responded, “What was the point? That people get older and fatter?” 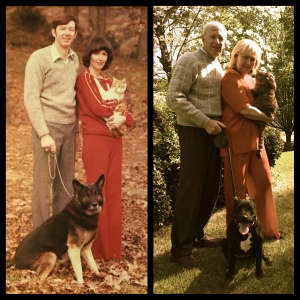