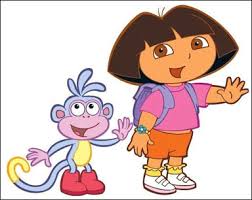 Dora the Explorer is a very highly televised children’s tv show that is mainly shown on the Nick Jr network. Millions of children enjoy  and learn from this  bilingual spanish speaking girl and her friends in which they go on engaging adventures that involve  solving clues, learning various spanish terms, and sing alongs.

Dora the Explorer can be found almost anywhere. There are toys, lunch bags, book bags, books, movies, fruit snacks, clothes, etc., that can be found easily with Dora and her friends on it. She also available on the Nick Jr. website with games and other interactive activities for children to enjoy.

The storyline for this character which consists of her best friend “Boots” ,  and her trusty backpack which travels with her on adventures and sometimes run’s into the villan fox named “Swiper” has an ongoing coherence throughout the various transmedia franchises. A change has not been made  to the original story line. Because of this, children and also parents are able to identify with  and recognize  the franchise more easier.

Fans are able to be fully immersed with Dora due to the many theme parks that involve this story line. Themes parks such as Kings Dominion in Virginia, to Six Flags in Georgia carry this theme within their parks for fans to enjoy. Dora can also be deemed as extractability due to the widespread of merchandise that is made available for fans to enjoy during “everyday life” when they are not able to be fully immersed with this story line.

Transmedia extension for this story line can be seen in which the story goes into greater detail of Dora’s immediate family. For instance, he grandparents and parents can be seen more heavily throughout the television show and also merchandise such as books, video games, and movies. With this, fans are able to see a richer depiction of Dora’s personal family life.

Within the show series two of the main characters, “Boots” and “Swiper” have episodes in which it is mainly centered around them. By having episodes like these, the narrative arc is slightly shifted due to the storyline focusing on other characters within the narrative. The video games online and also books carry these storylines of the  other main characters so that  they are able to spread these  ideas across multiple medias.

The transmedia extension of Dora’s immediate family serves’ as a way to explore the narrative through new eyes due to her parents or grandparents giving her valuable advice on what to do when she comes to them with her concerns of solving a problem or for help/guidance when she doesn’t know what to do in her adventures.

Fan produced musical plays are widely popular with this story line. The plays tie’s in and becomes part of  the narrative. The story lines that are portrayed within the television show are the same ones that are seen within the live plays. There are more musical numbers and also live, energetic dances in order to keep the children/fans engaged and involved.